Palm oil is a key ingredient in the food products produced by most major fast food chains. For example, palm oil and palm oil derivatives can be found in Subway’s bread, bread toppings and cookies - as the following ingredients list for a Subway double chocolate chip cookie illustrates:

Palm oil’s usage isn’t restricted to fast food, however, with it having now become an essential component in many of our everyday shopping basket items including margarine, biscuits, bread, breakfast cereal, instant noodles, shampoo, detergents, chocolate and ice cream. It is the most widely used vegetable oil on the planet, accounting for 65% of all vegetable oil traded internationally. Global production of palm oil has doubled in past decade to keep pace with consumer demand, and is expected to double again in next one. So what’s the problem?

Palm oil only grows in the tropics, in some of the world’s most biodiverse regions. Large-scale palm plantations have mostly been established on land that used to be virgin tropical rainforest. Palm oil plantations in south-east Asia have tripled in just a decade, driving deforestation, habitat and biodiversity loss, and the destruction of communities across Indonesia and Malaysia as people are displaced from the land.

Palm oil plantations also have a large impact on greenhouse gas emissions because they are often established on land converted from swamp forests, which release carbon dioxide and methane when they are cleared by fire. This is also impacting on human health, as smog from forest fires is estimated to cause 100,000 deaths a year across south-east Asia. This false colour satellite image shows smoke billowing from fires within palm oil plantations on the Indonesian island of Sumatra. Fires glow orange in the image and newly burned land is dark red: 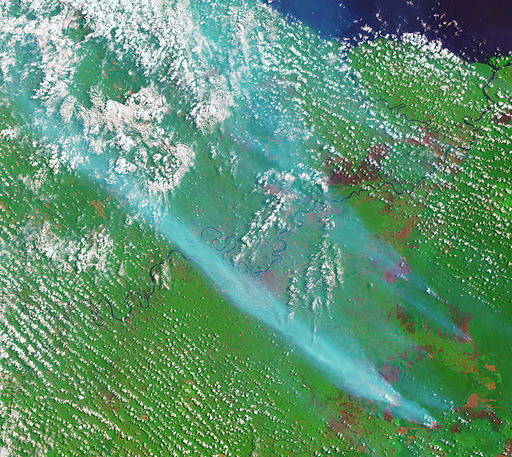 The biggest global consumers of palm oil are India, Indonesia and China, who between them consumed 42% of the palm oil produced in the 2013/14 financial year. After these three countries, the next biggest consumer of palm oil is the European Union collectively. With global demand for palm oil is unlikely to slow in the foreseeable future as the world’s population continue to grow, less environmentally and socially damaging methods of producing the commodity have been sought.

Demand for sustainable certified palm oil, which does not involve the deforestation of virgin forest, has been driven by European markets in particular where environmental groups have successfully campaigned on the issue. Transnational corporations operating in these markets, including the major fast food chains, have come under increasing consumer pressure to reduce their social and environmental impacts, including the use of palm oil in their products.

Corporation such as Unilever and Mars have responded to these demand and made strong commitments to a ‘deforestation free’ supply chain. Subway are similarly committed to address their sourcing of palm oil but in a report by the American Union of Concerned Scientists in 2015 they were found lacking when it came to being able to demonstrate supply chain traceability – though still outscoring some of their fast food competitors on their palm oil sourcing policies.